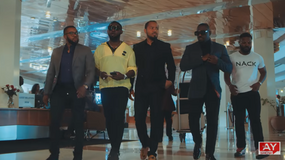 Olamide gets a cameo appearance in ‘Merry Men’ sequel as AY releases an official trailer.

Olamide joins AY, Ramsey Nouah, Jim Iyke, and Falz for the sequel of the film, which had the original grossing a total of N228 million in 2018.

The 2 minutes long official trailer was released by AY on December 4 and had scenes of AY, Ufuoma McDermott and Regina Daniels displaying some fighting skills.

Makun's 'Merry Men: The Real Yoruba Demons' which made N228 million, was crowned the highest-grossing Nollywood movie of 2018.